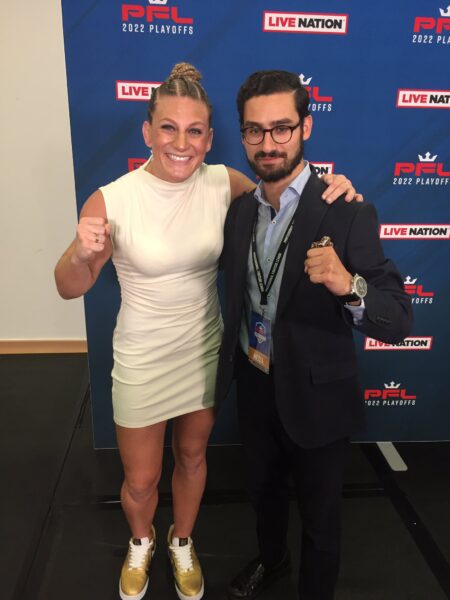 As the tube strikes continue in London, making it difficult to get around in an already rather impossible city to navigate, I finally made it to my destination: PFL’s London debut at the Copperbox Arena. The doors were locked and the Arena staff didn’t seem to know what was going on. A frustrated VIP guest – whom I later learned was in charge of a charity which has teamed up with the PFL – informed me that some of the desk attendants had no idea what the PFL was! The staff did their best, to be fair, and the PFL’s own staff could not have been friendlier and more accommodating to the media. Once we were through the doors, we were met by a superb event.

While setting up our stations, the first fight began. Zebenzui Ruiz vs Raphael Uchegbu. Leaning across to my fellow writer, I asked whom he had down to win. “I might be biased, but I’m going with the UK fighters!” He replied. The jocose prediction broke down already with the first fight which ended with the Spaniard Ruiz taking home a decision win. The night presented 13 bouts with 9 British fighters, 5 of whom walked away victoriously. One rising star who won an unsurprising victory in a surprising fashion was Dakota Ditcheva. Daughter of a former combat sports world champion, she vows to follow in her mother’s footsteps and claim a world title of her own. The first victim on her path to gold was Hassna Jaber, a talented kickboxer. Ditcheva has recently joined Kayla Harrison’s gym ATT in America and is no doubt a future superstar. This made me think the fight was slightly miss-matched. Ditcheva won by submission through strikes, as she kneed Jaber right in the gut. A perfectly executed shot. She is clearly someone the PFL want to push, and certainly, someone fight fans should follow.

The loudest cheers of the evening were directed at Brendan Loughnane. As we predicted, he beat the odds and took the unanimous decision. He was introduced as a striker fighting Christ Wade, a wrestler, but Loughnane started his career as a wrestler before he started boxing. With that said, it was his precision striking that impressed the crowds. Kicks and punches, all superbly timed. One doesn’t hear of “fight IQ” as often anymore, but if anyone or anything evidences the existence of such a phenomenon it was Loughnane last night.

Clinching a place in the featherweight final in November, Loughnane will face Bubba Jenkins who also secured a spot in the finals as he defeated Ryoji Kudo. Two suplexes in the first round followed by a rear-naked choke submission. Sporting tattoos with the words “pride” and “reckless”, I asked Bubba about the other side of martial arts: the spiritual or philosophical side. What motivates him? He lit up, proclaiming he is indeed a ”warrior priest” and seeks to embody the warrior spirit. He turned to Muhammad Ali who is his inspiration, but he seeks to outdo the accomplishments of his hero. We spoke for a while after the interview and I could tell he relished the opportunity to speak out about his faith, mental strength, and determination. Fans should be excited about his title fight with Loughnane. It’s some time away, but although Loughnane carried the energy of his home crowd into the cage, he won’t be performing in front of a home crowd next time. He is confident he will win as he can wrestle and Bubba is a wrestler, and one Loughnane thinks is worse than Wade. Bubba on the other hand struck me as serene and full of energy in himself. I think Bubba takes the million-dollar prize and becomes, as he put it, the first millionaire in his family.

Judo is perfect for MMA! It is better than wrestling because while wrestling teaches you control, Judo gives you takedowns and submissions on a different level. – Kayla Harrison

Another Ali is Swedish Ali Taleb who defeated the British Darius Mafi in what was a momentarily frightening submission win, as Mafi staggered to his feet and fell to the ground again after being choked. He turned out to be fine and asking Ali (trained by legendary Swedish coach Akira Corassani) why he thinks Swedish fighters are doing so well he said it’s all down to hard work. ”We have seasoned fighters who push each other to the limits and beyond.” He added. As I finished asking the question Sadibou Sy walked into the room. Sadi has fought his way to the PFL Welterweight Finals, and together with Taleb proves the success of a small country in the far North of Europe.

The undoubted superstar of the evening was of course Kayla Harrison. Fighting in the city where she first won Olympic Judo gold, Kayla had made it clear in pre-fight interviews that it was an emotional return. As mentioned prior to the fight, she is undefeated and continues her streak after finishing off Jindrova in the first round with a Kesa-gatame turned into a choke. Kayla, through her dominant career, has shown time and again that judo has a given place in the world of MMA. I asked her how she sees this connection. “Judo is perfect for MMA! It is better than wrestling because while wrestling teaches you control, Judo gives you takedowns and submissions on a different level.” She style herself as the grappling queen and after her win called out three Brazilians (Nunes, Cyborg and forthcoming title-bout opponent Pacheco) to find out who indeed is the MMA Queen. Speaking to PFL senior staff, they say they are keen on the fight but other organisations aren’t taking the bait. Whatever the reasons behind the fights not happening, I think it’s time to put the fighters to the test and give the world what it wants. Until then we cannot officially declare MMA royalty. Unofficially, however, Kayla’s laurels are unquestionable.

While I was in the Copperbox Arena at the Olympic Park in London, bare-knuckle fighting was once again gracing these isles. BKFC’s event in Wembley was a success from what I hear, but an air of upset was felt as England’s Michael Page lost against America’s Mike Perry on home turf. On top of that, Joshua lost by split decision to Usyk. You can’t have it all, England, but a UFC title is once again held by a UK fighter, as Leon Edwards defeated Usman in an upsetting and spectacular fashion. A KO left kick to the head, dropping the champion to the canvas out cold. I predicted Usman for selfish reasons – Usman vs Chimaez would be huge. Perhaps we get Edwards vs Chimaev instead if the Swedish wolf beats the veteran gangster Nate Diaz. Could it even take place in Sweden? As they say, hope is the last thing ever lost. With a loss, Diaz might retire from the UFC, as Rockhold did last night following his decision loss against Costa.

As I made my way back to where I was staying, I was once again struck by the density of the population of this city. Arriving on Friday I saw broken spirits, hardened faces, and distressed souls. The atmosphere at the Arena was a stark contrast, full of anticipation and energy. It was buzzing with its roughly 3000 attendees, which is not bad considering it is the PFL’s first London event. People seem to live for the weekend, and riffing off something the Swedish theologian Joel Halldorf has written, sport carries religious dimensions, taking over much of the space religion once took in society. It is as if the events of the weekend (theatrical shows, sporting events, and musical performances) take on the role religion once had. It takes us out of the ordinary, of the mundane and normal, lifting us to a higher sphere of existence sustained by its own rituals. But tomorrow is Monday, and people (in London at least) head back to work in a dysfunctional tube and railway service. Fortunately, there are more combat sports to enjoy next weekend. Let’s just get through the week first, and remember the joy in Edward’s and/or Usyk’s faces as the belts were wrapped around their waists. Let’s also make PFL Sweden happen!