The History of the KimuraFighter Magazine 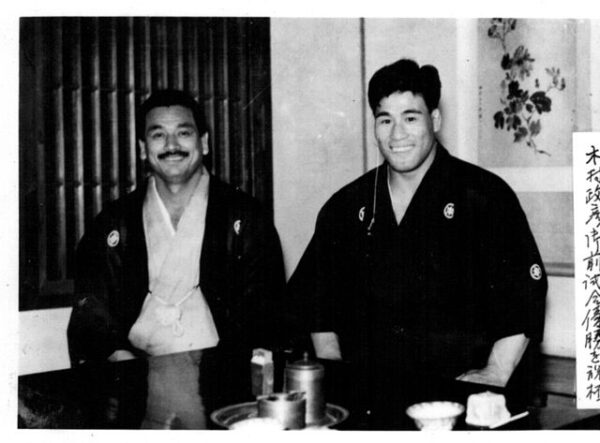 The first submission technique I was ever taught in grappling was the Kimura. I found it tricky as it required a good amount of set-up and my inexperience lent itself to very slow and staccato progress from set-up to submission. I also got to feel the power of the lock, tapping before my arm snapped. But what is the story of this famed and effective lock? How did it become known as “Kimura,” and how has it been used in martial arts?

One of the strongest and most successful judokas of history is the Japanese heavyweight Masahiko Kimura. From 1936 to 1950, he never once lost a judo match. In 1935, he lost four matches, but they are the only fights he ever lost. He became a superstar in the world of Judo, and by the age of 30, he was promoted to a 7th Dan black belt. It is claimed that at the height of his career he would practice for 9 hours a day, with 1000 push-ups included in his daily regime.

In 1949, Kimura and some of his fellow judokas were invited to Brazil where they were challenged to compete by Helio Gracie, the alderman of the Gracie family which later founded Brazilian jiu-jitsu. One of Kimura’s friends by the name of Kato was the first to accept the challenge. Their first bout ended in a draw while Kato lost the second fight to Gracie by gi choke. Following this defeat, Kimura stepped up to the challenge to avenge his friend in front of a crowd of some 20.000 people. Kimura was insulted and booed by the Brazilian crowd who by this point had become convinced of the superiority of the new martial art devised by some of their fellow countrymen.

As the saying goes: pride comes before fall. With superior strength, Kimura managed to pin Gracie down, although the Brazilian refused to give up and countered many throws effectively until he was finally felled. Once on the mat, Kimura kept control over Gracie, eventually grabbing hold of his arm, performing a wrist lock, and rotating Gracie’s arm until it snapped. Gracie refused to give up, and with another twist, Kimura snapped the arm again. Gracies corner threw in a towel and the fight was over. The technique utilised by Kimura carries his name to this day, but it has always been a part of the judo arsenal.

In Judo, what is now popularly known as the Kimura has always been known as the ude-garami and it is one of the officially approved locks in Judo, being a part of the Kodokan rule book. It is a Kansetsu Waza, meaning joint lock, targeting the opponent’s elbow. The lock is typically considered a bent arm lock, as the pressure builds up in the shoulder joint, which forces the recipient to tap out and surrender. Yet, sometimes the elbow or humerus often breaks if an opponent decides not to submit or gives up too late. This happened to Gracie and was about to happen to me during my first class.

The lock is very effective and hence it is used in different styles, such as Sambo and submission grappling. It is sometimes called a double wrist lock. In many ways, the Kimura has become a kryptonite in relation to the Gracie family. When Kazushi Sakuraba, “The Gracie Hunter,” fought Renzo Gracie, he submitted him with a Kimura. The submission technique is sure to continue to be used in MMA and various martial arts styles, as well as by the armed forces who are often trained to utilise it in unarmed combat.